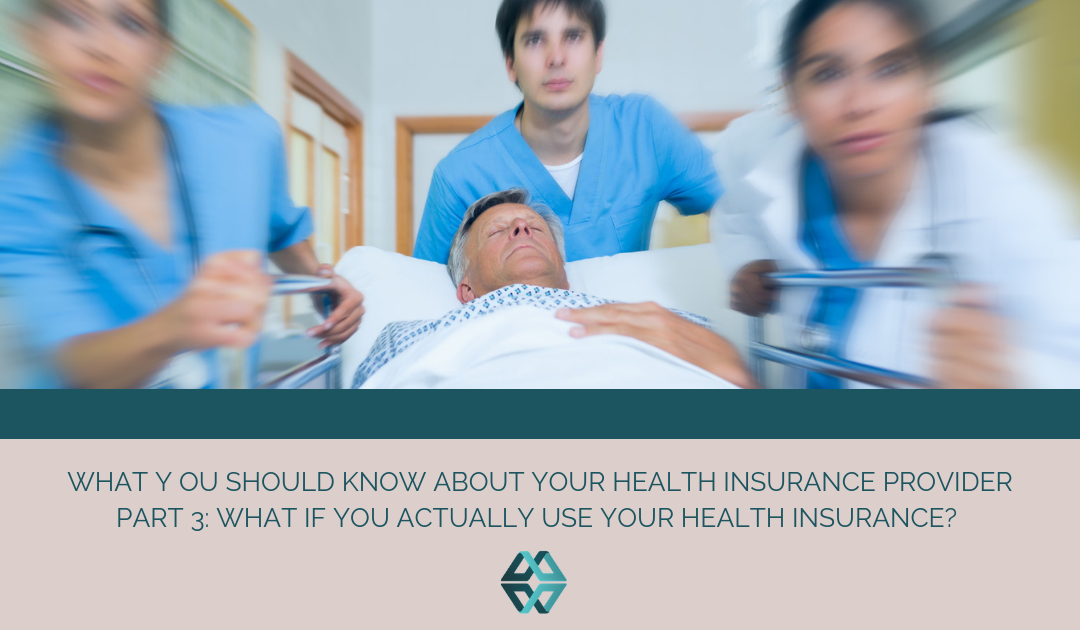 What exactly does your health insurance provider do, and what does it matter to you? In this multi-part series, we discuss in detail the 8 primary functions of your health plan:

In the first two posts of this series, we discussed primary functions 1-4 (above), listing out how networks are created (part 1) and how plans are designed and priced (part 2). In today’s third installment of this series, we will discuss what happens when you actually use your health insurance.

Why does the average family spend $28k per year on healthcare costs? In the first article of the series, we talked about how the lack of transparency in healthcare make it difficult for consumers to control medical costs, or even predict them. In the second article, we highlighted what your monthly insurance premium pays for. A staggering 15-20% of your premiums are devoted to maximizing health insurance company profits and making sure they pay as little of your healthcare claims as possible.

Your health insurance company monitors the medical care you receive, a process that increasingly falls on you, the consumer. The patient has to be aware of what treatments are covered under their insurance and which ones are not, knowledge that’s not always easy to access. You might not be aware of any of this behind-the-scenes coordination until you receive a statement. These statements tell you what your out-of-pocket costs may be, and if the claim was denied.

In part 3 of this series, we examine the financial aspects associated with a patient receiving care (and their bill).

ABOUT THOSE ADMINISTRATIVE (READ HIDDEN) COSTS

Like many insurance providers, health insurance company profits depend on paying out less than they take in. You may ask, “Doesn’t every for-profit business?” Too true. But, health plan providers got so wrapped up in maximizing profits at their members’ expense that the ACA mandated minimum value standards.

This medical loss ratio (MLR) or 80/20 rule states that an insurer must devote “80 cents out of every premium dollar to pay its customers’ medical claims and activities that improve the quality of care.” It turns out, paying a lot of executive compensation and shareholder dividends makes private industry VERY expensive paper pushers. Private insurers spend between 14 and 18 cents of every dollar they take in on administrative costs (including executive salaries).

But the lion’s share of administrative costs, muddied by a complex system, may actually be due to the expense of collecting payment from patients. That’s correct: some of the hidden costs you pay (headlined under Administrative costs) are in fact the price of chasing revenue.

“It’s a mistake to think that billing issues only reflect complex interactions between providers and insurers. As patients are required to pay more money out of pocket, providers devote more resources to collecting it.”

Medicare, which does the same job of negotiating rates with doctors and hospitals and paying claims spends only 2 cents of every dollar on administrative costs. Although it may be hard to believe, the federal government does the same job that private insurers do for a fraction of the cost.

Based on estimates provided by the center for Medicare and Medicaid Services, in 2011 private insurers spent $157.6 billion on administrative costs. Medicare could have provided this same service for approximately $20 billion

This really begs the question: if our healthcare system requires a middleman, why do we want the middleman to be a for-profit company?

When a patient seeks medical care, there’s often an unnecessary, invisible giant in the room: your health insurance company. And this rather large presence is there monitoring whether or not the care your provider gives is deemed, in their opinion, medically necessary.

An inability to prove medical necessity will lead to a denied claim. While it’s sometimes a matter of a clerical error or poor coordination of care, it’s often the patient who is left footing the bill.

“Health insurance bureaucrats insert themselves between patients and their doctors, all too often resulting in potentially life-saving treatment not being provided or patients getting stuck with bills far beyond their ability to pay,” writes Wendell Potter. His status as a CIGNA executive-turned-whistleblower adds a particular weight to that statement. Larger than expected bills are crippling to individuals, most of who have no experience battling insurance companies on medical necessity.

But first, let’s talk about the claims process or, what happens when your provider bills your insurance company for the care you received.

The “billed” amount is not a real price at all. If you don’t have private insurance or government insurance (such as Medicare, Medicaid, or CHIP) you will not receive any medical services. Period. When you call or walk into a doctor’s office you will be asked for your insurance. No insurance, no service.

The only exception to the “no insurance, no service” rule is when sick people show up at an emergency room. As a society we don’t want to leave people to die in the waiting room of a hospital or spread dangerous diseases like Ebola or tuberculosis. The costs of caring for sick people without insurance are built into insurance premiums and state budgets (which are paid for with tax dollars). There is no such thing as free care – everybody pays. YOUR CLAIM IS DENIED

Let’s say you receive a statement from your insurer informing you that your claim has been denied. While just a business matter for your wealthy insurance company, for an individual or family, the inability to pay a medical bill is a crippling reality. The AARP estimates that 200 million claims are rejected each year.

Fortunately, a patient can be their own advocate. It isn’t easy, but it is feasible to appeal a denied claim and get it approved yourself. Forbes contributor Steve Brozak offers 5 tips should your medical claim be denied:

1. Find out why your claim was denied.

5. Learn the fair market price for the treatment that your insurer denied.

Sometimes a claim is denied due to minor errors, such as the wrong birth date or other inaccurate information that’s most likely a data entry error. Those are easy fixes, but don’t get comfortable. “If your claims denial is more complex than a simple error and your insurance provider still refuses to pay the claim, be persistent. Insurers are obligated to pay claims in a timely manner and in accordance with the wording in their policies; however, you may experience delays or more denials,” says the National Association of Insurance Commissioners. Claims denials are a hard battle to fight, after all: if you lose, your health company wins in the form of more profits.

Your insurance company increases its profit by paying fewer claims at cheaper rates and by selling policies with a high premium. The very best customer is one that buys the most expensive policy he or she can, and never goes to the doctor. Your insurer is very good at analyzing actuarial and economic data and consumer behavior in order to increase the chances that you will overpay premiums and underutilize benefits.

You can measure just how good insurance companies are at reducing the amount of claims they pay, reducing the amount they pay doctors and hospitals and selling you plans with high premiums by the staggering amount of money they make. In 2015 United Health Care’s revenue was $157.1 billion. Its CEO was paid $66 million. More on that in our next post.