What You Should Know About Your Health Insurance Provider Part 4: Profits Come First 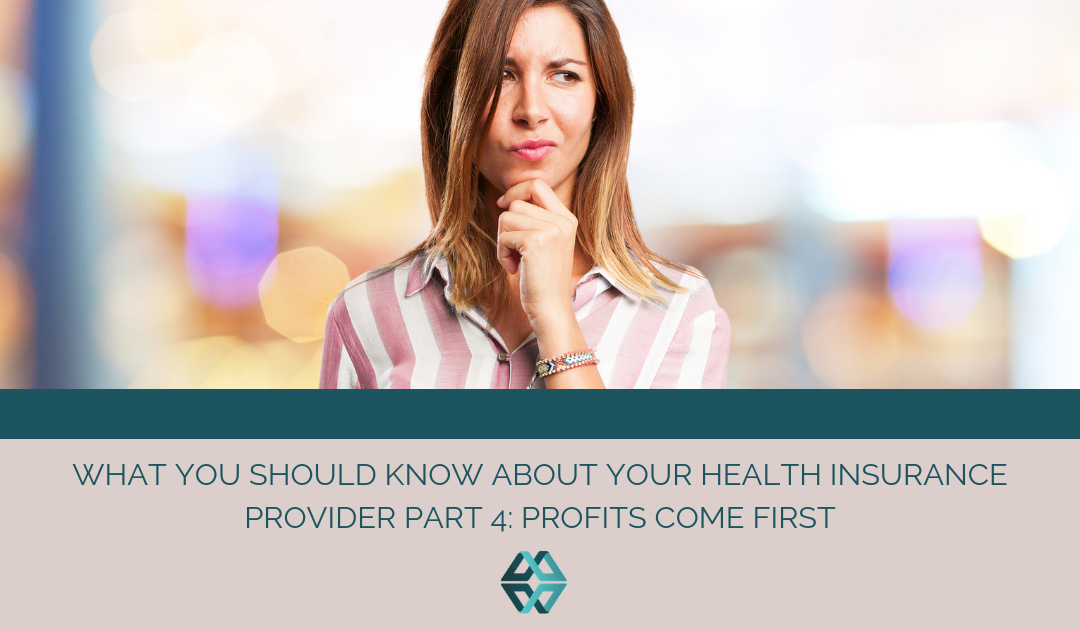 What exactly does your health insurance provider do, and what does it matter to you? In this multi-part series, we discuss in detail the 8 primary functions of your health plan:

Despite the talk from health plan leaders about how their focus is on their members’ satisfaction, you barely have to read between the lines to understand what they really work for: the almighty dollar and their shareholders’ satisfaction.

Before diving into the fourth and final post in this series, catch up on our other posts here:

In Part 4, we will cover the last primary function in the list above: “8) Return money to shareholders and pay executive salaries”.

Consumer fear and lack of education around how health insurance works is exactly what insurance companies need to maximize their profits. The common rhetoric around higher health care costs is that insurance companies themselves are suffering and passing along costs to consumers as a way of staying afloat. But this isn’t the whole picture, and many Americans have no idea that health care CEOs aren’t merely surviving – they’re thriving in this market.

Insurance companies talk a lot about how the ACA really damaged their profitability. What they haven’t told you is how they’ve stabilized the loses, and guess who is left paying the price? Consumers. The executive summary of the White House’s 2018 study titled “The Profitability of Health Insurance Companies” reads “Despite significant financial losses in the individual market after the key provisions of the Affordable Care Act (ACA) took effect, health insurer profitability in the individual market has risen.”

“All health insurers can expect to become more profitable this coming year due to the recent tax reform.”

Axios reporter Bob Herman wrote that U.S. health care CEOs have made money at a rate much higher than the wage growth of Americans, noting that the 113 CEOs he interviewed have made $9.8 billion in the 7 years since the ACA was enacted. “For the longest time, health care inflation has really blown away the rate at which the rest of the economy is growing,” said Herman in an interview for his article. According to him, healthcare executives have every incentive to do whatever it takes to make stock prices go up. “These are the exact opposite things that health policy experts believe would benefit the broader system,” explains Herman.

But others say that the sticker shock on healthcare CEO salaries should be tempered with facts. Such as, the fact that the top 40 firms with the highest paid CEOs are not health insurance carriers. Or, that healthcare CEOs aren’t paid outside the corporate norm. “The fact remains that salaries are part of the administrative costs that health insurance companies are required to limit under the Affordable Care Act’s medical loss ratio rules,” writes health insurance agent Louise Norris. Nonetheless, many Americans are struggling to pay for medical care, and that alone justifies examining the profits that health care insurers make.

WHAT YOU NEED TO KNOW

Health insurers act as the middleman in the healthcare ecosystem. But many wonder how this affects rising healthcare costs, and if rates are padded merely for the sake of profit. Let’s look more closely at how health insurance companies actually make their profits.

According to health care equity analyst A.J. Rice, most healthcare companies make most of their money providing insurance coverage to employers and through government programs, like Medicare Advantage and Medicaid managed care. The reported earnings of Aetna, Humana and Cigna all rose by 45% last year, even though losses were seen on individual plans purchased through the health exchange marketplace.

Medical Loss Ratio caps insurers’ administrative costs (including profits). But there are some loopholes that consumers need to be aware of. Many health insurers view government health plans as a predictable market, where they make money running programs on behalf of the government as managed care organizations. And the MLR is seen to actually inflate costs, incentivizing health care companies to spend more in order to make more.

This is all well and good for health insurance companies, but is it really best for consumers? It’s estimated that 1 in 5 Americans are currently being pursued by collectors over medical debt. Yet, while healthcare is often cost-prohibitive for consumers, a select number of health care CEOs find the high cost you pay for medical care to be good business.

NPR pursued exactly how bigger medical bills benefit health insurers earlier this year in an article titled “Why Your Health Insurer Doesn’t Care About Your Big Bills.” The article, which chronicles Michael Frank’s bogus medical bill (Frank, among other things, taught actuarial science at Columbia University) finds that his health insurer didn’t care that they paid over $26,000 for a medical implant that should have cost $1,500. With a bill totaling $70,000, Frank was left owing $7,000. This, he says, is grossly inflated because his insurer and the hospital negotiated rates that were needlessly high. Frank learned that the same surgery under Medicare would have totaled in cost around $20,491. Frank estimates that a fairer amount owed by him would be around $1,500. “Turns out,” says the article, “insurers don’t have to decrease spending to make money.”